The Capitol Steps show originally planned for Friday, March 20 has been rescheduled for Sunday, June 21 at 3 pm for a special Father's Day matinee.

All Season, Flex-Pic and Individual tickets previously purchased will be honored at the make-up date.

We thank you for your patience and understanding.

The Capitol Steps have elevated political satire to an art form. This Washington, DC-based comedy troupe gave audience laugh cramps with their bipartisan lampooning. The Capitol Steps began in 1981 as a group of Senate staffers who set out to satirize their employers, and haven’t let up since. It doesn’t matter if you’re a Republican or Democrat, a snowflake or a deplorable: neither side is safe from the group that puts the “MOCK” in Democracy! Since they began, the Capitol Steps have recorded over 35 albums, including their latest, Make America Grin Again. 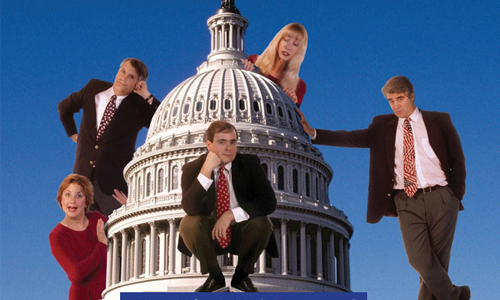